Beets are a biennial herbaceous plant from the Amaranthaceae family. Originating from Egypt, where archaeologists have found the oldest traces of beets inside a pyramid dating from the Third Dynasty. The ancient Greeks ate only the leaves of beets, and they revered and offered the root to the sun god Apollo at the Temple of Delphi. The Romans, on the other hand, ate the roots, but mostly for medical purposes. They used it as a laxative or to treat fevers. The beet was long and thin, resembling a carrot. However, the beet as we know it today appeared in Central Europe in the 16th century, and after several hundred years it spread across Eastern and Western Europe.

The beet stem is upright, up to 40 cm high, although it can grow up to 2 meters high during the flowering stage. The root can be up to 3 m long, with most of it being thickened burgundy hypocotyl, which is fleshy and succulent and half of it protrudes above the surface of the earth. The leaves are on burgundy petioles and the leaf blade is greenish or red with red veining. Due to the length of the stem, the stem usually bends to the ground or rests on other plants. The flowers are bisexual, small and unobtrusive, clustered together in simple flowers consisting of five green leaves, five stamens and a pistil. The fruit is a one-seeded nut of irregularly rounded shape.

Beets are full of nutrients that protect the body and are called a super-food for a reason. They are an excellent source of energy that protect against premature aging and they generally affect better functioning of the body. Beets have been used for years as a cure for anemia, but they have also proven useful for treating leukemia. They contain folic acids, high amounts of iron, potassium, vitamin C, beta-carotene and chlorophyll. Beets detoxify the body, stimulate liver and kidney function, normalize blood pressure and prevent varicose veins. 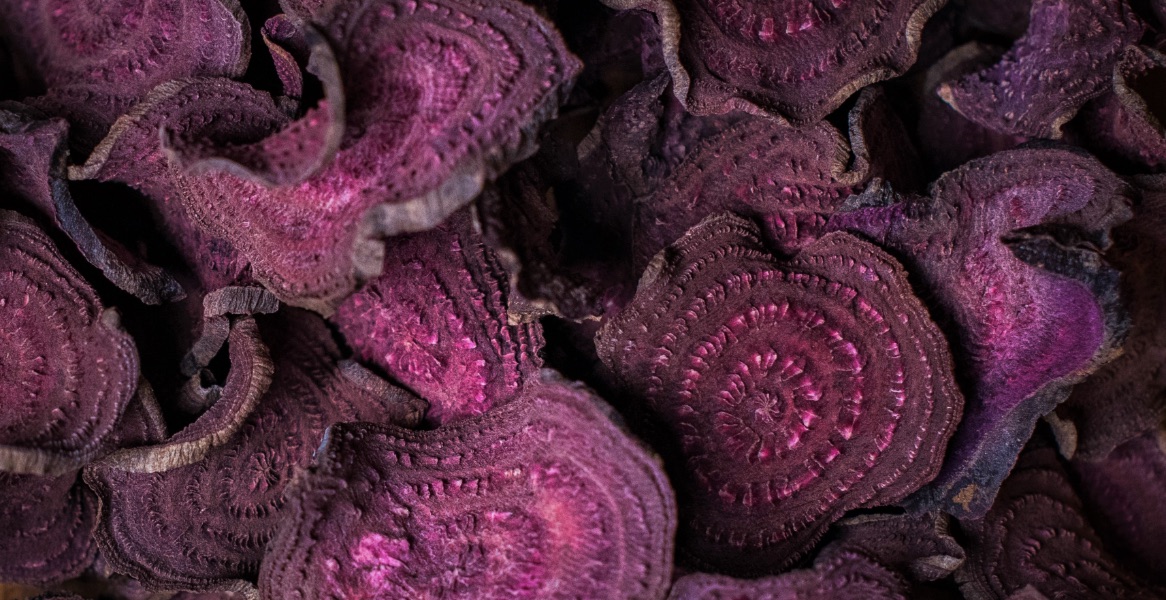 The root of a beet is usually eaten cooked, baked, pickled or raw. It can be used in salads, stews, smoothies or side dishes. Borscht is a beet soup originating in Ukraine, and today it is popular in many countries of Eastern and Central Europe. The green, leafy part of the beet is also edible. Young leaves can be added raw to salads, while mature leaves are most often served steamed, in which case they have a spinach-like taste and texture. In addition, beetroot juice has gained in popularity because of all the benefits it contains. In Poland and the Ukraine, the beet is combined with horseradish to create the popular Burački, which is traditionally used with cold cuts and sandwiches. Betanin, deriving from the root of the beet is used as a food colorant, for example to amplify the color of tomato paste, sauces, juices, tonics, jams, ice cream, sweets, and similar. Beetroot powder, obtained by grinding dehydrated beets, can be used as a color for cosmetics, food, soaps and clothing. In ancient times, women rubbed beet powder on their cheeks, using it as a blush. It is a perfect substitute for artificial red because it does not cause any allergic reactions.

Fresh beetroot is rarely used as a decoration and ingredient in cocktails. For this reason, dehydrated beets are easier to use because they have a longer shelf life and they are an unusual addition to meals and drinks. Dehydrated beets retain their color and taste, which is then released when it comes into contact with the beverage.

Dehydrated beets are an attractive decoration and ingredient for cocktails, soft drinks, smoothies and desserts. It goes well with wine-based cocktails such as dark port, tequila, vodka, but also in various lemonades and mock-tail cocktails. Dehydrated beets will give your drink a strong, sweet scent and a decent look.